The 9 Most Dangerous Things Drivers Do 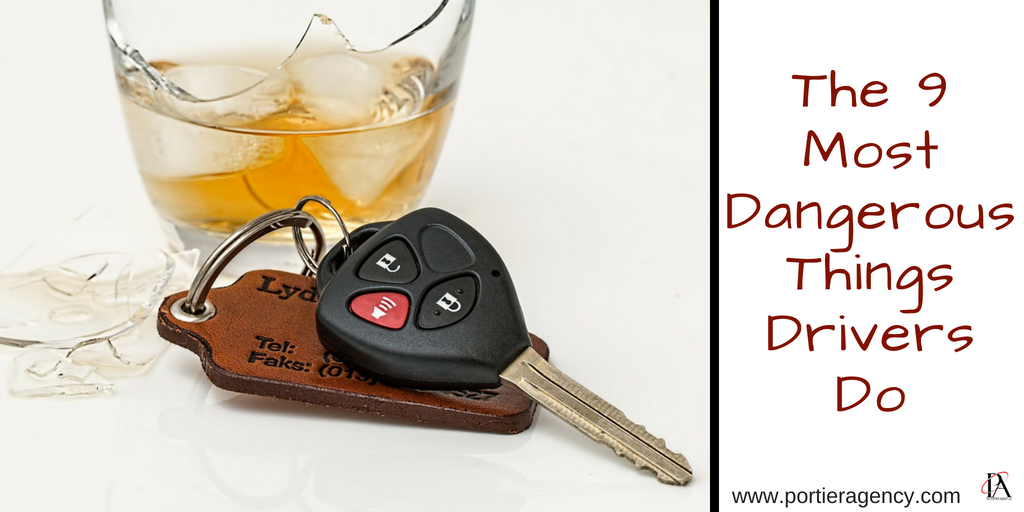 The 9 Most Dangerous Things Drivers Do

Driving a motor vehicle is dangerous business. According to National Highway Traffic Safety Administration data, the number of traffic accident fatalities in the U.S. has decreased markedly since the early ’70s. That said, the number of deaths still seems to hover at about 35,000 per year, and traffic accidents usually rank in the top ten causes of death annually.

Often, operator error is a key factor in a wreck. Here are a few things not to do if you want to keep from becoming the cause of an accident. Most of these are no-brainers. Unfortunately, there’s no shortage of seemingly brainless drivers on our streets and highways.

1. Driving under the influence of drugs and alcohol

NHTSA data paints a clear picture: drunk driving causes accidents. The majority of traffic-related deaths are caused by drunk drivers. It’s a well-known fact that alcohol impairs your ability to drive, and more importantly, to react. So follow common-sense guidelines like taking a taxi or using a designated driver if you’re planning a booze-fueled night on the town. Doing so can avoid tragic consequences. As laws governing the use of marijuana become relaxed in some places, it too has the potential to become a bigger part of the traffic accident statistical mix. You may think you’re good at driving high, but chances are that you aren’t. Law enforcement officers trained to look for signs of impairment will explain this as they lead you to the back seat of their patrol car.

Drowsy driving is every bit as dangerous as drunk driving. When your body needs sleep, it’s going to get it, one way or another. People who insist on driving when they should stop for a rest will have slower reaction times and are likely to fall asleep at the wheel. The results usually aren’t pretty. Drivers who are sleepy or asleep tend to crash on high-speed roads, and they usually don’t do anything to avoid the crash in the moments before impact. The problem is such that some luxury automakers have introduced driver aids intended to combat drowsy driving. So if you feel yourself nodding off, pull off the road and grab a few Zs someplace safe. You might get home later than planned, but that’s a small trade-off for your safety and that of the drivers sharing the road with you.

Speeding is the second leading cause of traffic fatalities after drunk driving. According to a 2005 study by the Insurance Institute for Highway Safety, “The relationship between vehicle speed and crash severity is unequivocal and based on the laws of…

5 common winter illnesses for pets Just like humans, animals are prone to getting sick…